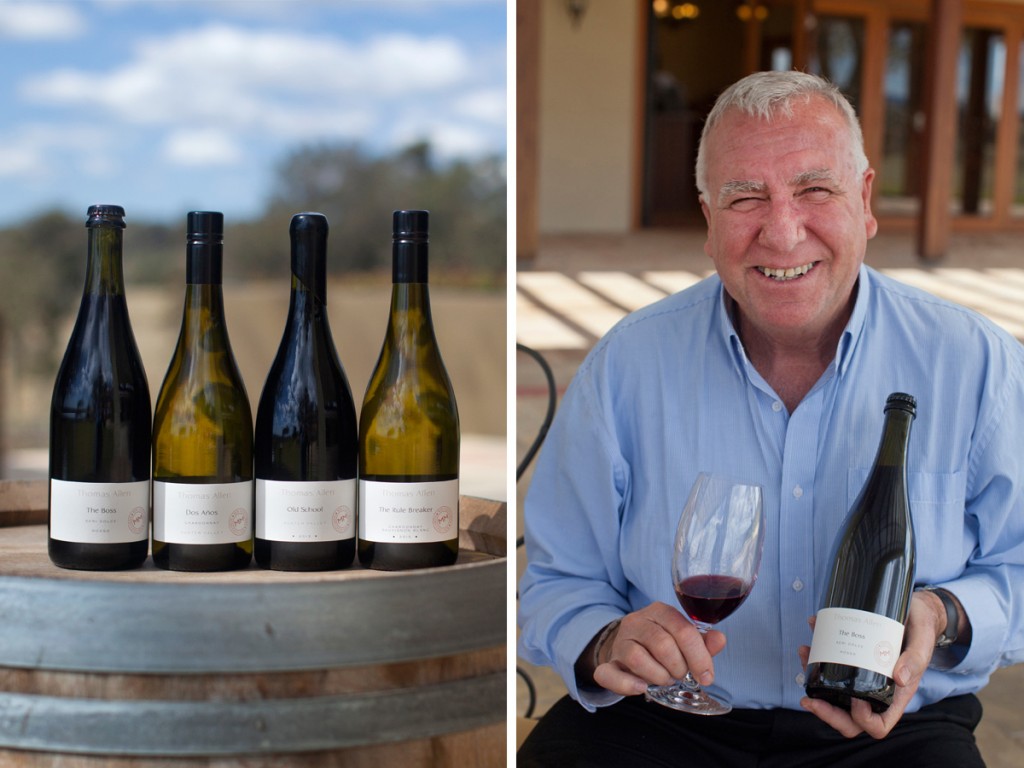 There has been no hibernating for the Thomas Allen crew this winter! Winemakers Craig and Steve have been busy putting some great new wines together for your tasting pleasure.

First off there’s The Boss, named fondly after our Cellar Door Manager, John Earl. He requested a wine for the cellar door that was a little but fun, not too serious and most importantly an absolute pleasure to drink!!
And The Boss was born…
It is a take on the Italian Lambrusco style, a fragrant and fruity wine, with a hint of spritz on the palate. It has been on tasting in the Cellar Door for about a week now, and as they say actions speak louder than words, and it has been marching out the door.

After the success of the IVP Chardonnay Sauvignon Blanc we have now released the Rule Breaker, as it is a blend that breaks all the rules. Most often, there are those that sit in the Chardonnay camp or those that sit in the Sauvignon Blanc camp, and never the two shall meet… until now. The Rule Breaker is a wine that displays the full and rich flavours of the chardonnay fruit enhanced by the aromatic zingy flavours of sauvignon blanc. The palate shows lovely buttery characters and a lingering soft finish. Regardless of what camp you sit in – go on, break the rules and tell us what you think!

We are sure by now, you have realised that at Thomas Allen Wines, we like to break the mould a little and are often a little unique in our thinking. And the Dos Anos is no different. Dos Anos, Spanish for two years, is just that – a blend of Chardonnay from both the 2014 and 2015 vintage. The result is a union of the near perfect growing season of the 2014 grapes, which are rich and fruit driven, blended with the more linear acid year of 2015 creating a textural and elegant chardonnay with subtle undertones of creamy yeast and oak complexity.

On our Moon Mountain Vineyard we have Shiraz blocks with a few impostors – every 8th row is Cabernet Sauvignon.  This unusual viticultural practice was common back in the 1930’s. The thinking behind this ‘process’ was that the riper Shiraz when picked with the greener less ripe Cabernet would give greater structure and acid balance to the Shiraz, particularly in hot years (such as 2013) when the riper Shiraz tends to drop acid. This was very much the “Old School’ way of viticulture.
Our normal practice would be to pick the Shiraz grapes first, leaving the greener Cabernet to ripen much later. Both being crushed and made into separate wines. In 2013 it was a hot dry year, with the Shiraz skins being quite thicker than normal and therefore more tannic. It was then we decided to put the “Old School” technique to the test and picked both the Shiraz and Cabernet at the same time. To our delight the greener cabernet did balance the riper Shiraz. It is a bold red, with aromas of rich cedary oak, ripe cherries and cassis. The palate doesn’t disappoint with enormous mouth-feel and big, but soft persistent tannins.
We’re thrilled to share these new releases with you.
Come in for a tasting or click here to Download an Order Form now!
in Latest News / New Releases / Wines
Share